The portfolio recently cracked 150 games! This gamedev journey started in 2007. Actually it started way before that with some mapping for Half Life and RPGMaker, but unfortunately those efforts have been lost in time. So let's stick with the first game release in 2007. This is now a great time to look back and pick some favourites.

While this blog post will focus on statistics and my favourite games, a second post will cover learnings from all those games and gamejams.

So when did I make all of those games? 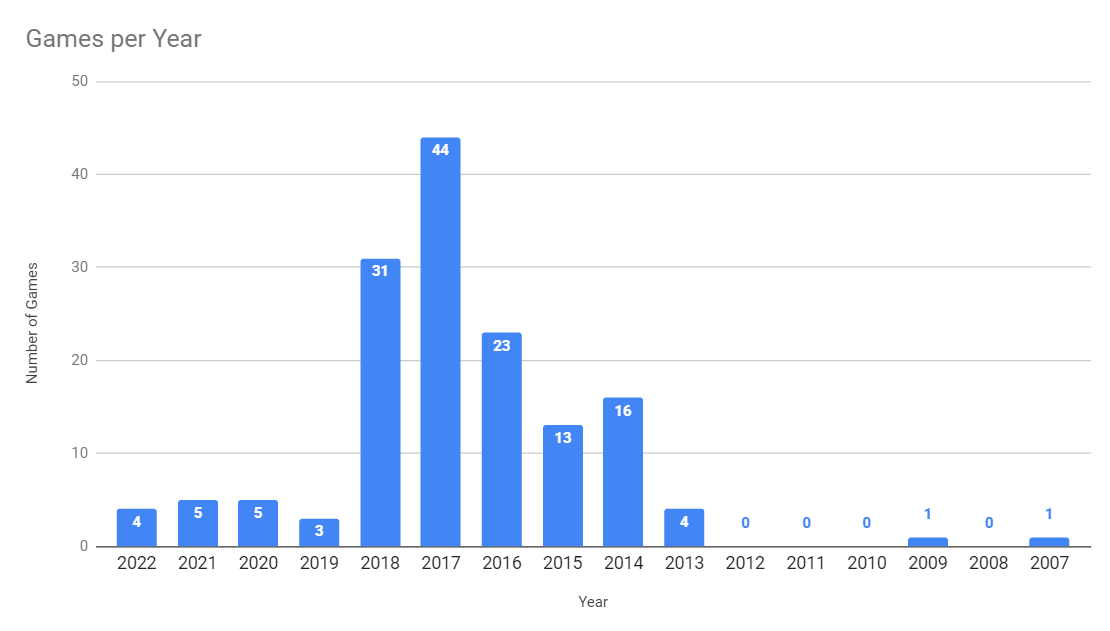 Before 2013 I was mostly stuck in the feature-creeped land of overscoping and never-to-be-finished prototypes. In 2013 a friend and I took part in our first Ludum Dare and I was immediately hooked on gamejams. Gamejam numbers quickly skyrocketed because I finally had a deadline to finish projects by. Big shoutouts here to one game a month (which I started in 2013) and one hour game jam (which I joined in 2015 for the first time). In 2018 I finished my PhD, left university and started to work as a full time software developer. Since then gamejams had to take a step back, as I was already working 40 hours per week on code and definitely wanted to see something else on my weekends. But I still keep doing multiple gamejams a year, mostly bigger projects in teams.

There is a good amount of tools and engines in those 150 games. The majority of them have been made using Haxe and Haxeflixel because those tools makes it super easy to see results after minimal time. In the last three years I have mostly used c++, because I use that in my day job which avoids contexts-switching and allows for high-quality work. Overall I have used C++, C#, Java, Javascript, Python, Unity, Unreal as well as GameMaker and RPGMaker.

With 150+ Games it is so hard to pick some favourites. Surely there are quite some trainwrecks - with 150 Games there just have to be some. But there are also so many games I am genuinely proud of. In fact way more than I can mention here. I tried to limit the list to ten games, but sometimes smuggled in multiple games per entry, as they just belong together. Please also note that those are all gamejam entries. So they are no fully released AAA or even Indie titles, but most of the time just prototypes. This list is sorted by releasedate.

It started with Thunraz creating a fast-paced helicopter arcade game for js13k 2014. We both liked the idea and gameplay very much and wanted to do a more elaborate version of that. The "redux" version is one of the games I worked on for the longest time (multiple months) and I think this shines through.

While the gameplay of the original was already nice, the redux version really turned out way better. Everything feels juicy and there is quite some content in the game. There are multiple enemies, multiple special weapons, nice sounds, screenshakes, a full map to explore, an animated intro and then there is even a hidden local coop mode.

The original was written in javascript, while the redux version was done using Haxe.

The Idea for this game is a rather simple typing game. Enemies (called "Errorists") are walking towards you. You need to type their name in as fast as possible to make them go away. If one of them reaches your character, the game ends. One key feature is the "battle manager", a mechanic that dynamically scales the number of enemies. This helps to create flow for the player, always keeping them on edge without overloading them completely. Of course the names get more and more complicated (and thus harder to type correctly) as the game progresses. And if you make a typo, the errorists win - or at least get closer.

This game was done during one month using C# and Monogame. I am also really proud of the music. Back then I had no Idea what harmonies are, but for that the song turned out quite nice I think.

This was a collaboration with the awesome Zoltan Haller (unfortunately no link) who created some incredible good pixel art. Also this was released on mobile. You need to mix poitions based on color theory. Patients come in and require more and more complicated recipes.

The timeframe for this was around one week of christmas vacation, in which most of the game was done. There were some minor adjustments later on added, but nothing major. The game was even covered in a Superlevel blog post, which made me super proud.

This is a very relaxed game. In the winter of 2016 it was time for Ludum Dare 37 with the theme "One Room". Thunraz, BloodyOrange and I wanted to create a hotel management simulation inspired by Theme Hospital and SimTower, and so we created "Hotel One Room" (or "HOR" or "Hortel" as we call it internally).

There are quite some nice mechanics in the game. The player has to build and upgrade rooms of various sizes and employ a workforce of cleaners to keep them tidy. Guests arrive at the reception and have different expectations and depending on how much they liked their stay they might or might not tip generously. Of course if the guests have to wait too long, because all rooms are booked, they leave in a grumpy state.

The gameplay is really laid back, with not a lot of stress, the music works out great and BloodyOrange did some awesome pixelart work. I regularly fire this up just to build a nice small hotel. It is so nice to sit back, relax and just watch the guests enjoy a nice vacation in my classy hotel.

A winning entry! In 2017 BloodyOrange, Sturmvogl and I joined the Gaminfection Hackathon and were rewarded with the "Best Overall" prize. The hackathon was about Pneumonia and raising awareness for that deadly disease.

The gameplay is about a pathfinder for pneumococci who falls down and explores the throat. On the way down you can collect powerups that help you to avoid defense mechanisms. It offers a scripted intro and two different endings, depending on how many powerups the player collects on the way down.

The game was developed during one crazy weekend in Haxe and supports keyboard and gamepad input.

Oh yeah this is a juicy one. This is a generic shoot em up (SHMUP) game done within one hour. I used every second of that time to pack an incredible amount of particles, screenshakes and flashes into the game. And the result is definitely worth it. AQUAGON used that time perfectly to create a nice music for the game.

So grab your keyboard and blast those enemies back into space!

I don't do games for financial profit, but this one was a really lucky shot. The game features an awesome title screen animation by BloodyOrange. It was winter themed and by accident released just before christmas. Idle games make some nice gameplay, which a lot of people seem to enjoy. This lead to some algorithm pushing it up alot for some players. On kongregate Idle Snowflake has an mind-blowing 11467 plays and in fact did generate quite some revenue. So to say, it is (financially) my most successful games so far. Anyway, I still have to claim that revenue at some point. Being created in just one hour (plus some afterwork) the effort was extremely low for such an amazing outcome.

The game is a simple idle game where you take water to some more and more elaborate forms of ice and snow. The graphics of the gameplay are rather simple and I had to write a dedicated [arbitrary precision number library[(https://github.com/Laguna1989/hxArbitraryPrecisionInt) for Haxe, as there was nothing available.

Unfortunately it also showed some dark side of the game industry. While gamedevs are a great community, some players seem to have a really bad attitude. If you are having a good time, check out the comment section on kongregate. Note that I already removed the comments that have been strongly insulting or otherwise inappropriate.

Anyway, the game is no longer playable, which is presumably a good thing. Flash support was stopped at some point, and the html5 build is broken because of a change in how gamejolt deploys files. I never did a windows build, but if you have a linux system, there is still a linux version available.

Physics FTW. This one was one of the games where I did not know if it would work out at all. And - quite surprisingly - this one worked out really great. The player is in control of the moon lander ready for touchdown and controls the power of the engine in those critical moments. The acceleration of the lander is controlled by the player, while the gravity of the moon pulls the lander down. The goal is a smooth touchdown on the surface of the moon with minimal velocity. If you mess up the acceleration, the lander might crash hard onto the surface of the moon or, quite contrary, if you overpower the lander might fly off into space.

The visuals are rather minimal due to the short timescale. But the focus here is really on the mechanics. For a one hour gamejam entry, I am so happy how this turned out. It is feasible and quite easy to learn, but hard to master. And of course the player can put additional challenges on top, like the fastest touchdown, minimal G-forces or minimal fuel consumption. Moon lander was developed in Haxe and still runs today. If you like physics inspired puzzles, definitely give it a try.

Thyl's Tale was a collaboration from BloodyOrange, KaramBharj, Thunraz and me for the 2018 Kajam (Retro). We wanted to create a Hyperlight Drifter / Zelda inspired ARPG. The player goes on an epic quest, combats various types of enemies, dashes to evade and cross deep chasms and solves puzzles. We worked on this for around a month (also rather on the longer side). This was possible because Kajams are very relaxed events. In the end we had multiple music tracks, a cutscene and a boss with multiple stages and even some speedruns in the Alakajam Tournament later in 2018.

The game was one of the last games written in Haxe as we were very familiar with the framework at that time, but we reached the limits and support as well as stability had unfortunately not been so great with Haxeflixel. Since 2015 there have been multiple breaking API changes (FlxCamera, anyone?) and as flash was discontinued, native builds often not compiling because of library incompatibilities and other nuisances. So this game marks the end of the Haxe-era for me. Anyway this game holds a special place for me, as it is quite feature packed and really enjoyable to play, still today. 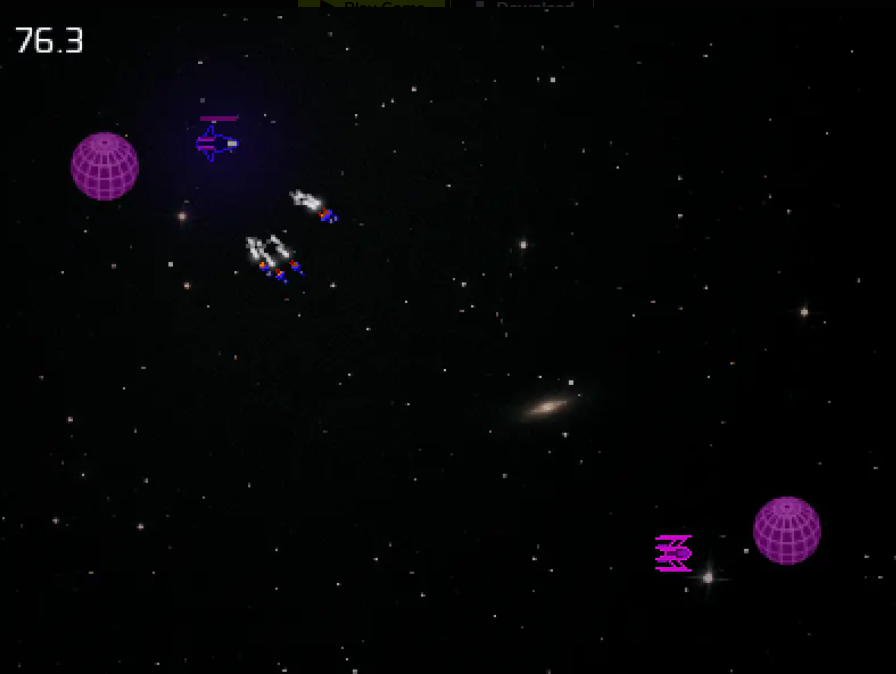 Another physics based game. And another one where Thunraz and I took a prototype (Slingshot) and turned it into a more polished game (Quasar Rush). The original Slingshot was written for one hour gamejam in 2019. The player controls a spaceship which is orbiting around a planet. If you played KSP, then you know the drill of orbit mechanics. The player needs to collect coins with a limited amount of fuel.

Quasar Rush extends the gameplay for the "A Game By Its cover" gamejam in 2021. William Hackworth created an awesome cover for the Famicase exhibition which inspired us to pick the idea up again. The extended version is now featuring combat, ship upgrades and multiple distinct missions. Quite a bit of improvement over the original Slingshot.

So this is the list of my favourite games so far. In a next post I will present some learnings from all of those gamejams. I hope that you enjoyed the list and the games.